For patients with non-Hodgkin lymphoma (NHL) receiving chemotherapy, primary prophylaxis against febrile neutropenia (FN) can safely be administered on the same treatment day, if necessary, according to a review of patients from the Cleveland Clinic, presented at the 2013 American Society of Hematology annual meeting.

“Prescribing guidelines recommend that G-CSF not be given until 24 hours after the receipt of chemotherapy, but due to logistical issues of outpatient insurance coverage, travel, and patient convenience, it is not always practical to delay G-CSF administration until the day after chemo,” said James Karol, MD, PA-C, of the Hematologic Oncology and Blood Disorders section of the Cleveland Clinic. “Based upon existing but limited safety data, some patients at our institution received G-CSF on the same day as chemotherapy, beginning in 2006.”

Karol and his colleagues evaluated the safety and efficacy of giving G-CSF early. They identified 113 patients with NHL treated with R-CHOP who received G-CSF primary prophylaxis at the Cleveland Clinic between June 2004 and July 2012. They retrospectively analyzed the incidence of FN and associated outcomes for patients who received prophylaxis on the same day (D1) as chemotherapy (n = 31), compared with those receiving it at least 24 hours afterward (D2+) (n = 82).

FN Incidence, Clinical Outcomes Similar
The FN incidence was almost identical between the groups, occurring in 8 of 31 of the D1 patients (25.8%) and in 21 of the 82 patients in the D2+ group (25.6%) (P = .91). This contradicts previous prospective studies in small cohorts showing a higher rate of FN with D1 treatment, and more severe and prolonged neutropenia.

No significant differences in relapse-free or overall survival were observed. Risk factors associated with mortality in the multivariate analysis included the development of FN (hazard ratio [HR] 4.33; P <.001) and receipt of R-CHOP while hospitalized as an inpatient (HR 7.16; P <.001).

“For patients who require G-CSF support, next-day administration remains the recommended schedule; however, same-day administration can be considered if you are concerned about access to care or patient compliance,” he told The Oncology Nurse-APN/PA. 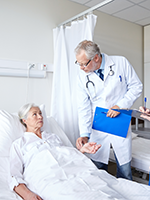