Chicago, IL—Chlamydia trachomatis (chlamydia) infection was shown to increase the risk for developing ovarian cancer by approximately 2-fold in 2 independent studies presented at the 2018 American Association for Cancer Research Annual Meeting. In each of the studies, women who had antibodies against pGP3, a protein that is a validated marker of active or previous chlamydia infection, had twice the risk for being diagnosed with ovarian cancer compared with matched controls. Interestingly, no association was observed between antibodies related to other infections and ovarian cancer in either study. 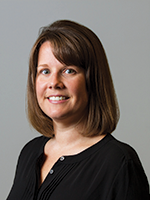 “The fact that there were no associations with antibodies against other infectious agents really supports the specificity of the association of chlamydia infection with ovarian cancer,” said lead investigator Britton Trabert, PhD, MS, Earl Stadtman Investigator, Division of Cancer Epidemiology and Genetics, Metabolic Epidemiology Branch, National Cancer Institute, Bethesda, MD.

She pointed out that pelvic inflammatory disease (PID) is associated with a doubling of the risk for ovarian cancer, and chlamydia infection is the leading cause of PID.

The studies included a Polish population-based case-control study of 278 women diagnosed with ovarian cancer between 2000 and 2003 and 556 matched controls, and the National Cancer Institute–sponsored Prostate, Lung, Colorectal, and Ovarian (PLCO) Cancer Screening trial, a nested case-control prospective trial with blood drawn prior to diagnosis, that included 160 women who developed ovarian cancer during follow-up and 159 matched controls.

Dr Trabert and colleagues measured serologic markers of sexually and nonsexually transmitted infections, including chlamydia, human papilloma virus, herpes simplex virus, hepatitis B, and hepatitis C. The antibody to chlamydia, pGP3, was the only one that was significantly associated with ovarian cancer.

“We do need to evaluate whether treatment of PID and chlamydia is preventive,” Dr Trabert said.

A limitation of this study is that the multiplex platform used to test for antibodies was not able to provide reliable results about antibodies to Neisseria gonorrhoeae, another established cause of PID.

“This study is notable for being an international collaboration between the Polish study and the PLCO to provide tissue samples, and it suggests that we can go a long way toward improving detection of ovarian cancer by routine screening for PID and chlamydia,” Dr Mardis said.