Adjuvant chemotherapy had impressive gains in disease-free survival (DFS) and metastasis-free survival versus surveillance in upper-tract urothelial cancer (UTUC), according to the results of the phase 3 POUT clinical trial that were presented at the 2018 Genitourinary Cancers Symposium. There was a suggestion of a survival gain with chemotherapy, but longer follow-up is needed.

UTUC is a relatively uncommon and neglected disease, and, until now, the use of perioperative chemotherapy has not been the standard therapy. US-based researchers favor neoadjuvant therapy, but no phase 3 clinical trials have been conducted to date. The UK-led POUT trial managed to mount and complete a randomized phase 3 trial of adjuvant chemotherapy in this uncommon disease.

POUT was one of the most often tweeted clinical trials from the meeting, where it was met with much praise.

“It is a triumph getting behind a trial with a low-incidence tumor. UTUC is a relatively rare disease, and it is safe to say it is more lethal than muscle-invasive bladder cancer. It has been neglected, with little interest, and can be considered a ‘Cinderella’ tumor,” Dr Birtle said.

Standard treatment for UTUC is radical nephrourectomy (ie, removal of the ureter and kidney) followed by surveillance, with chemotherapy given when needed.

“There is a paucity of data to guide us as to whether to use adjuvant chemotherapy. Small studies of systemic chemotherapy show a tantalizing hint of benefit in disease-free survival and overall survival, so we set out to explore this in a larger study,” Dr Birtle told attendees.

The POUT study enrolled 260 patients with histologically confirmed stage pT2 to pT4 node-negative urothelial cancer after radical surgery. Within 90 days, patients were randomized 1:1 to receive 4 cycles of gemcitabine (Gemzar)-based chemotherapy or to surveillance.

The choice of chemotherapy partner, cisplatin (Platinol) or carbo­platin (Paraplatin), depended on glomerular filtration rate (GFR); patients with a GFR >50 mL/min/­1.73 m2 were given cisplatin, and if their GFR was 30 to 49 mL/min/1.73 m2, then the patients received carboplatin. In addition, all patients received supportive care.

The metastasis-free survival rate at 2 years was 74% in the chemotherapy arm versus 60% in the surveillance arm, a 51% benefit (P <.001) favoring chemotherapy.

“There is a hint of a survival benefit, with curves diverging early, but longer follow-up is needed,” Dr Birtle observed.

“We need to build on this study with international collaboration and have larger studies powered for survival,” she concluded. 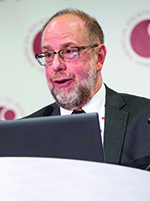